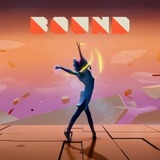 The player controls an unnamed princess and ballet dancer as she makes her way through surreal, dreamlike environments. She must complete platforming challenges and has the ability to dance to repel enemies.