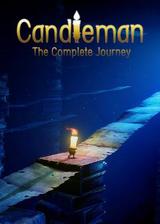 Despite only being able to burn for 10 seconds, a little candle journeys into the darkness, with the purpose of seeking light.