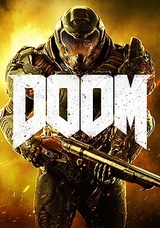 Players take the role of an unnamed space marine as he battles demonic forces from Hell that have been unleashed by the Union Aerospace Corporation on a future-set colonized planet Mars.