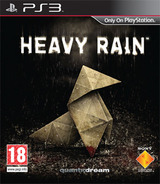 The day after celebrating his son Jason's tenth birthday, Jason and Ethan are hit by a car; Jason dies, and Ethan falls into a six-month coma. After he wakes from the coma, Ethan, blaming himself for Jason's death, divorces his wife Grace and moves into a small suburban house. Two years later, while at the park with his other son Shaun, Ethan blacks out. When he wakes up, he discovers that Shaun has been kidnapped by the "Origami Killer".÷