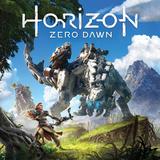 The story is set in the 31st century, in a world where humans have regressed to primitive tribal societies as a result of some unspecified calamity. Their technologically advanced predecessors are vaguely remembered as the "Old Ones." Large robotic creatures known merely as "machines" now dominate the Earth.