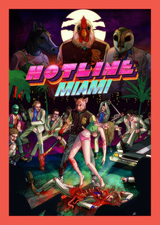 In Hotline Miami, the player takes the role of an unknown man that is plagued by visions involving three masked strangers who discuss his identity and his actions. He wakes up in his apartment on April 3, 1989 and receives a message on his phone about a delivered package of cookies and how he should read the list of ingredients. He finds the package outside which contains an animal mask ('Richard'), and instructions to go retrieve a briefcase at a certain location while eliminating everyone there. After completing this task, he continues to get more of these messages and follow their orders.