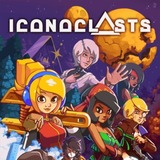 The main character is Robin, a naive and helpful mechanic. She lives in a world where the sinister religious authority the One Concern, ruled by a being known as "Mother", has taken over the government, and allows only licensed mechanics to handle the power source called "Ivory" that drives its machines. Due to her attempts to help people in need despite being a self-taught mechanic, the soldiers of the One Concern track down Robin and label her a criminal and a heretic, which forces her to escape along with her allies and fight back against the One Concern