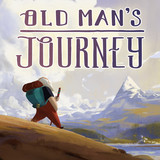 Old Man's Journey is a tale about an old man and his journey through the past and his life decisions.