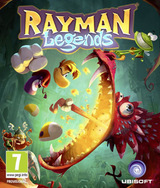 Its plot takes place one century after the events of Rayman Origins. Rayman, Globox and the Teensies have been sleeping for a century. During that time, the Bubble Dreamer's nightmares grew in strength and numbers, and so has the Magician, who has split into 5 "Dark Teensies". Rayman and friends are awakened by their friend Murfy who tells them about the bad news, and tells them that the 10 princesses of the land and the Teensies have been captured by the nightmares and the Dark Teensies.