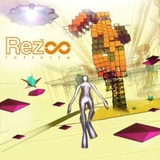 Rez is a rail shooter in which the player takes control of an onscreen avatar traveling along a predetermined path through the computer network. The player does not control the overall path, only the avatar's position on the screen. The player targets foes by holding a "lock-on" button while moving an aiming reticule over up to 8 enemies. Once the "lock-on" button is released, the avatar fires shots that home in on each target. Failure to hit an enemy or projectile in time may cause a collision, which reduces the player's current evolution level by one and changes the avatar's form.