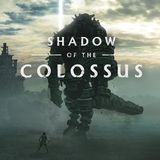 The game's storyline focuses on a young man named Wander who enters a forbidden land. Wander must travel across a vast expanse on horseback and defeat sixteen massive beings, known simply as colossi, in order to restore the life of a girl named Mono.