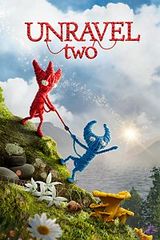 The game centres on two Yarnys, which can be controlled with either one player or two, which must work together in order to solve puzzles and manipulate the world.