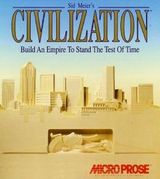 Everyone has a story. It goes something like this.

We started off in a grassy region. Founded first three cities before we discovered another ancient civilization, the Egyptians. They weren't very friendly, and declared war on us. After 300 years, and many bloody battles we wiped them off the face of the earth. Their cities are now our cities and a part of our great and glory empire.

I love how every game play becomes so personal. "Those damned greeks, I must wipe them out." You plan to invade, and then the german comes and take you from behind when you're most vulnerable. And when you loose, you become so angry that you have to play one more game.

This is probably my most played game on the Amiga. I spent hours and hours of fighting epic battles, keeping my citizens happy and growing my population to huge amounts.