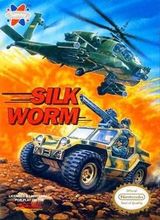 One of my favorite co-op experiences on the Amiga was Silkworm. In this shooter game, you play as a chopper or a buggy, or both if you have a friend.

I can't remember that we actually reached the end, but I know that we were damn close. This game and its action got hellish after a while and it was really hard to stay alive. Many good hours spent, and I like the concept of a co-op where the gameplay experience is different between players.