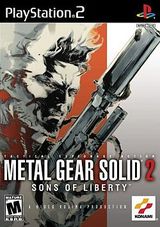 First Metal Gear Solid game I played was MGS4, and I hated it.

Let's say that I couldn't give it justice, because I was expecting something else. I was expecting an action shooter, and I got a cinematic sneaker. It frustrated me that there where so little game and so much cut scenes. It bored me, and in the end I was playing the game with a book in my offhand.

Now, I've played Metal Gear Solid 2 on my PSVita to learn what this series is. Learn to understand it, and I think I do. I understand that I didn't give MGS4 a fair chance.

Metal Gear Solid 2 is an interactive action story that plays quite differently from action games of today. It leans a lot on story telling and fiction and less on gameplay. It is a sneaking game where you do best in not being seen, but can handle some situations where killling is neccessary. (you can go through the whole game without killing anyone or raise an alarm, or so I've heard)

I love the backmetastory of this game. How a sequel to Metal Gear Solid was expected and all trailers of this game showed Solid Snake game play. In reality, only the first prelouge mission you play as Snake, and rest of the game is played as Raiden.

Raiden is a rookie. I would say that he is a wimp. He is not as near as cool as Solid Snake. That is of course a tactical decision, because through Raiden's eyes, Snake gets cooler and cooler. A walking talking murder machine that does magic. When playing Raiden you feel vulnerable and weak. In the end, you know that you did accomplish something, even if you weren't Snake.

The story is complicated. Too complicated for its own good. It makes it interesting, but it also lifts my focus from time to time, to the point where I don't care.

The greatest weakness of this game is the controls. It took me half the game to get used to them, and in the beginning I kept dying because I couldn't control my character. Boss fights are interesting and the highlights of this game (as they should be in any game).

This game came out 2001, and I've been playing a HD remake for the PSVita. I must say that it looks incredible and the it plays awesome for a game that is over 11 years old.

If you own a PSVita you should definitive get this game unless you played it before.