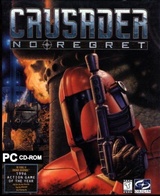 Most games have an increasing difficulty, where the game ends in the highest difficulty. If it where to increase anymore the game would be unfair to the player.

I loved Crusader: No Remorse because it was hard and fair. What I didn't expect of its successor was that it would begin in difficulty where No Remorse ended.

Increasing from there would be totally unfair if not supplied with some new tools. Controls has been adjusted so the Silencer has become much easier to get to do what you want. You have a new arsenal of weapons that are much more powerful and maps are full of secret passage ways that will ease your pain through the game.

The game is hard though, and it expects a lot from you. My favorite story is where you go through a totally hardcore map, just to enter a room that is totally clear. There is no camera, no guard - just a few boxes.

An alarm bell goes off in your head and you know it is a trap. You haven't seen this kind of trap before, but you can feel it in your guts. You save the game before entering the room.

Floor starts to go descend and you die instantly.

That is an example of great game design, where the level designer can create such a trap, without introducing the concept before, and have me as a player to recognize it as a trap the moment I see it - just because things does not seem right.

I love this game. The story is not as good as the first, and the cast is not as interesting. The gameplay and the level design is however top notch and I hope that there will be a remake of this series sometime in the future.

Review Crusader: No Regret on R3PL4Y