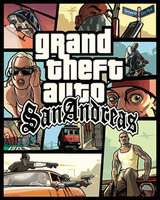 Every GTA has a theme. Vice City's theme was the Miamy drug cartel and in San Andreas it's about the Boys in the Hood. I really loved Vice City so I bought San Andreas at the moment it hit the stores. It is different, but not at a dissapointment.

What I love about the GTA games is that there're so much things to do in their sandboxes. Go out start a gang war, steal cars, shoot pigeons, get a girlfriend and go dancing. All kind of cool minigames like police missions, run a firetruck or drive a cab.

Compared to Vice City, San Andreas is huge. There are three major cities and a huge span of countryside. Your missions take you from one city, to the countryside to next city and in the end you run your missions all over the map. There is a great variety to the missions and they are most of the time a lot of fun.

I've completed the game three times, but I've started playing it a lot more times than that. The game is simply too long. Even if you skip a lot of content, you still have 40-50 hours of gameplay until you've finished the game. It would be much better if the main storyline was short, and the side missions - optional content where much more compelling. If mission structure whould have been a little more like Skyrim, I think this game would have been a jackpot.