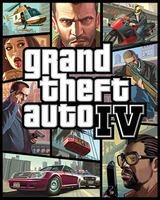 This is the best GTA game to date. The story about Nico Belic as a newly arrived immigrant in Liberty City is compelling and really good. As always, Rockstar presents funny characters and a sandbox world with lots and lots of stuff to do.

When this game came out it was totally gorgeous, and sometimes too good looking for the PS3 as the framerate could drop from time to time.

The soundtrack is great and it is a blast just driving around listening to the radio. Lots of popular culture references that makes you laugh out loud.

This time I think Rockstar really succeeded in telling a story, where previous GTA games mostly have been centered around missions and getting to the end of the game. The story has been mostly an afterthought.

By the end you do get a bit tired of Liberty City, and you wish that this game had the variety that San Andreas had. But anyway, it is a great game and one of the best I've played on the PS3.