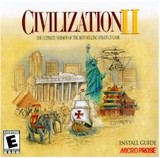 I bought this game from a friend that didn't like it. It was 1996 and I think I paid 200 SEK for it. The graphics where stunning. The world was so much more alive than its predecessor. The in game wikipedia was unbelievable.

I played this game for several years until Civilization 3 came out. And when it did, I was still convinced that Civilization 2 was much more balanced and kept playing that.

Today, I no longer play Civilization 2 but I have it properly displayed in my bookcase as a relic of where I come from - right beside Civilization 3, 4 and 5.