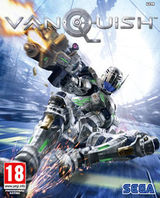 The father of modern action games.

This game has teached us a lot about how to create action. It is a fast paced bullet hell that drowns you with enemies and seemingly impossible bosses, and rewards you as you progress through its seven circles of robotic hell.

Is it a good game? Yes! It brings a lot to the table, but it fails on the narrative. I would like an in depth story, complex characters and a purpose to the fighting. Here I'm given none, and the game falls flat as just another shooter.

It's sad, because it had a lot of potential.