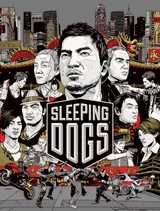 GTA has a smell and a feel. You can tell that a game is developed by Rock Star just by the depth of the characters involved and the length of the story line.

This is not a Rock Star game, but it follows the GTA template. You steal cars, run races, beat up people and get from point A to point B as fast as possible. The typical GTA game - except this does not have excessive characters portraying some typical pop culture stereo type. This game is trying to be a serious Hong Kong drug cartel action movie game.

It succeeds in many ways. The story is somewhat interesting and the characters would be too if they weren't so generic. The real master piece in this game is the actual sandbox which is extremely detailed and really alive.

After a while you notice that you keep playing the same missions over and over, with the only difference is the quest giver and the story around it. This is the fault of most games, and that is what drags the score down.

Rock Star really excels in their mini games, but here they feel like some half arsed try to be fun. The karaoke mini game is a nice hint of Honk Kong, but it is not challenging in any way and definitely not found. I was forced to play it 4 times. On the other hand, I really liked the code cracking puzzle - but then I'm weak for number puzzles.

If you get your hands on this game, play it! It is a really good game and it will surprise you from time to time. Just don't go out and pay a fortune for it.