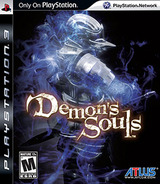 Demon’s Souls throws you into the world of Boletaria where you are captured by the Nexus and not allowed to die. I love this story and the game has some really cool characters and environments. Comparing it to Dark Souls, this game is much more extreme. It will really make life hard for you even if you are a Souls veteran. When the game ends, it is a game that you think back on wondering what was really going on, what happened and who was essentially good and who was evil?

The areas in this game are very diverse. You have the castle, the mines, the desolate tower, the tomb and the swamp. Each area have its own enemies with their strengths and weaknesses. This is lovely as some areas are harder depending on what build you choose, and you need to modify your character and play style to fit the area you’re currently in.

This game looks as well as Dark Souls and it plays a little faster. Your movement is faster and not as clunky. This helps as you will be swarmed by enemies in a way that you’re not in Dark Souls. You will fast fall in love with the Black Maiden and also other characters around the Nexus and you will start to love the areas you’re going to. The boss battles are not as good as the other games. Many of them can be cheesed by following a certain pattern which will not let you get killed. Sometimes you can shoot the boss with arrows from outside the boss room. The bosses are much more diverse than Dark Souls 2, and they are also memorable, but what I like especially is that they are slower paced. There are often zones in the boss room where you are safe and can heal up. The tendency mechanic is a strange one and will decide if you will make certain acquaintances. I don’t like this at all, as it is poorly explained (not at all) and even when you know how it works it is very hard to actually achieve a specific tendency.