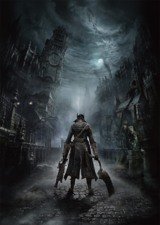 At 6 years old I came first in contact with video games, and of all the games I've played since then, Bloodborne is my favorite. Few games come close to the joys I've had with this game, though it is not perfect. Even the best game have some blotches.

In previous installments of Souls games you had a fixed number of replenishment items from every time you start from a bonfire. These estus flasks would always be 5, 10 or 15, and that would give you the same conditions for every retry. A great system.

In Bloodborne you pick up bloodvials and when you run out, then you're out. Most of the time, this is not an issue as there are plenty of blood vials as you progress the level, but when you're learning a new boss, the situation gets much more dire. You can spend 20 blood vials on a boss, but there is no way getting more vials. As you died to the boss you have no blood echoes to buy vials for, so your only options is to farm blood vials in the starting area. This is not hard, only boring and a waste of precious gaming time.

However, that is not my complaint. They are completely optional, and I like the challenge they bring. They provide more bosses, and more gameplay when the main storyline runs out. That is great in my book.

However it feels like they released the game without finishing the chalice dungeons. They start out great, with new enemies, new bosses and never before seen environments and traps. Then something happens and you get a regular enemy as a boss fight, only with more hit points. And a bit further on, when you meet Rom in the chalice dungeons it stops making any sense lore wise. If you have killed Rom on the surface, she can't be in a chalice dungeon. Maybe, if the chalice dungeon was a nightmare, but I'm quite sure that the chalice dungeons are labyrinths underneath Byrgenwerth. The same goes for Erebritas that can't be here and in Upper Cathedral Ward at the same time. This makes no sense.

I guess that chalice dungeons were saved for last in the development process and when Sony pulled the plug on the project and set the release date, they had to make some cuts and copy/paste bosses in order to fill out the content. It is too bad, as it could've been really great if the didn't.

Another thing that I find really stupid is that they hide a huge story plot at the end of the chalice dungeons, a bit of evidence that should not require 100 hours of gameplay. I assume they did it this way to reward exploration, but this piece of the puzzle is very important.

These are my issues with the game. Apart from it, the game is flawless and as I'm still playing my second playthrough with over 150 hours, I'm not even a bit tired of it.