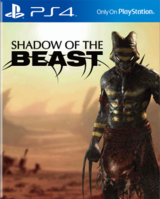 Shadow of the Beast
mikaellundin 22 August, 09:17 Completed the game

When I heard that Shadow of the Beast were getting a remake, I wasn't excited at all. It's kind of when you hear that your favorite game is getting a movie. It cannot ever turn out well.

So, starting up this game my expectations were at the bottom. I didn't even expect to finish this game, just play it up to a point where I could say "fine, I'm done with this". However, even if this game has a lot in common with its predecessor, the murdering difficulty is not mandatory. If you play through the game at "Beginner" difficulty, you shouldn't have any problem making it to the end.

I loved the first Shadow of the Beast on a number of particular points.

In any case, it is fun to play. The level design is good and there is always something new and interesting happening. Because the game is quite short, they don't reuse assets in order to make it longer. This makes it easier to play though as you don't tire that easily.

I was going to give this game 2UP, but the end boss fight was so goofy that I couldn't help my self burst out laughing. This is what I want from a game, to hit me with something unexpected and make a great event out of it. That is why I give this game 3UP, because I think it is worth playing through even if it's not game of the year.

Review Shadow of the Beast on R3PL4Y