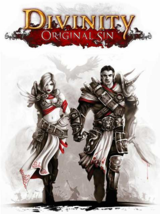 Have you ever wanted cake, really bad? So you get a cake and you eat that first piece and its heaven. Then you take a second piece and you start to get full and have a hard time to finish. Still there is 3/4 of cake to eat.

This is my craving for a Baldur's Gate adventure and Divinity is my cake. I had my fill before I even reach one quarter of the game, and the rest is a pain.

And I don't think I'm alone in this. After completing the game, taking a look at the last trophy for finishing the game only 4% of the players made it through, now why is that?

The game is certainly way to long. It took me about 70 hours to complete, and most of the game I played with a guide, because of reasons I will come to.

A game can be long, and still good. I haven't spent less hours in completing any of the FromSoftware titles and still craving for more. However, a game's length must be justified with an experience, introducing new things, keeping it interesting. Divinity: Original Sin feels rather prolonged because of the sake of making a long game, and that is never a good thing.

In order to complete a game, the game's content must be good. Sadly the story in Divinity: Original Sin is not very original, instead it is kind of model 1-A of role-playing games. It is not very well communicated, because sometimes I don't really understand why I need to go somewhere and find a certain character. At the end, it is not at all clear why we fought some of the earlier bosses.

Next the game play must be interesting. I love the way that you can solve every puzzle in several different ways, but it becomes old quite quick and there isn't much variety in puzzles and you tend to solve the puzzles with your favorite tools every time.

Some of the puzzles are stupid ones like finding invisible switches, running away from fights or trusting that you've leveled your sneak ability high enough. Those are not very fun.

I love that they have made the combat turn based, that is much better than the old 'pause at the right moment'. The problem is however that if you don't have a character with high enough initiative you can be killed in a fight before it even becomes your turn. And while that is part of the game, it is certainly not fun.

Another problem with the combat is that it's too hard. As a long time Dark Souls player I have no problem with fair-hard, but in Divinity: Original Sin you will loose a lot of fights because of a bad dice roll that you could do nothing about. This leads to saving after every turn in combat and that is not very fun.

Even the last boss fight is quite uninteresting, easy to cheese, and still you need to take care of an NPC that can be one-shotted at any time. No, this is also not very fun.

They could have made this game better. Most of the things that are in there are really good initiatives, but have been badly executed. Shorten the game to 1/3 of the length by picking the strongest parts, really work through the bosses, remove all stupid puzzles with invisible switches. I hope they really consider this for Divinity: Original Sin 2 and that they have learned from the first game.

I will never know. I don't think I will ever play another Divinity game.