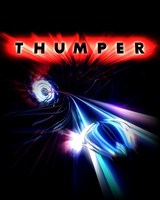 It is nice to get out of the VR headset after you've been thumping (playing Thumper) for the last hour. Your heart is racing from the adrenaline and if you close your eyes you will still see the thumps and the turns coming at you. It takes a bit to unwind and once you do you'll want to get back in, because that adrenaline is a drug.

It is impossible in words to describe to anyone what Thumper is. You're playing as a beetle, racing down a track trying to thump and turn in a rythm game fashion. This doesn't quite sell it, but if you've played a game like Guitar Hero on highest difficulty where your fingers start acting on their own and the game keeps pushing you to do more advanced stuff, then I think you know the idea and how rewarding games like these can be.

I bought the game purely on recommendation because descriptions, screenshots or videos couldn't sell it. I saw it turning up on peoples GOTY lists and though "huh, I need to check this out". When I first started playing I realized after the first level that I would never finish the game. This is the kind of game where I always run into a difficulty wall and stop playing. However, Thumper is different. I got past second level, third and fourth. I actually got all the way to the end without giving up or putting it away even once, and this really is a very difficult game.

The thing is that the game knows that it is difficult so it has a very slow difficulty ramp up. It will give you a pattern to learn and it will repeat that once, twice, fifty times and make sure that you know it before moving on. That can sometimes make the gameplay a bit repetitive but it combines patterns that you know in new situations or combined with other patterns. The learning is front and center of this game until the very end, and after doing so many katas you will sail through the parts where it's just repeating old patterns - and getting an S-rank from those sections on first try is so rewarding.

Games like these tries to be hard but Thumper knows that it is hard and tries to soften the difficulty. The gameplay is all about timing, but it is very generous about its timing. Many times I thought I missed a thump or a turn but the game accepted my late response anyway. It will never throw something at you that you're supposed to fail the first time, instead you're getting trained very slowly to deal with every obstacle. The game wants you to succeed and if you fail there is no loading screen, just a quick restart of the latest section making it natural to just try again.