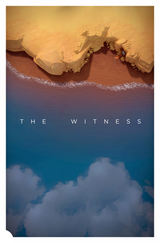 I'm out of the maze, and my mind is aching. It is the good kind of ache as after you've been out running. The ache confirms that you did something good.

The Witness is all about that ache. The pain is constant in this game as you struggle to understand, to grasp, to experience. Being used to struggle through, fast and hard, it pays off to stop. Not stopping as in giving up, but stopping as in reading in all that is now and here, instead of continuously pushing forward.

But also, this game is about pushing forward, learning by observing, pushing the boundaries in order to unlock that last piece of the puzzle. And as the game is trying to tell us over and over, it is not the goal that is important. It is what we learn by trying to reach that goal.

The strive and the stop. That is what this game is about. Or at least I tell myself that. I have no idea really. Who can say with Jonathan Blow.

You wake up in something that looks like a vault from Fallout and you step out into the sun. The beginning of the game feels very much like Portal, as you are an anonymous character dropped into an artificial world were you're forced to solve puzzles. You don't know why you are there and you don't know what will wait in the end, but you know that you'll have to continue.

In the beginning the puzzles are simple mazes to get through, but after a while they become much more complex. Rules are imposed on the puzzles, without much explaining. It is your job to discover what the rule is and then apply them to the puzzles. The game does a pretty good job with this, but many times I get stuck because I thought I had figured out a rule, but I'd only half understood it.

When the game starts introducing environmental puzzles, where the solution is in the environment in the background or behind you, the game really loses me. I don't find those as fun as the brain crackers and I start looking up solutions on the Internet because I'm tired of guessing what the shadow on the wall is supposed to reassemble.

It is a really rewarding game to play. When you solve a puzzle that you've been working on for a long time you get a surge of satisfaction and accomplishment. When you turn on your first lazer it is in awe - awe as in awesome.

Then you come to parts of the game that are plainly too hard, far fetched, circumstantial. You look to a wiki in order to figure it out and still can't get it. At those times the game is not fun, only tedious, and even if you can let it go and try some other puzzle in the meanwhile, it is still hard for a completionist like me. I struggle forward even when the game wants me to stop. That could be my own fault that I don't enjoy it as much as I potentially could.

In reality I don't think this game is meant to be finished. I think the purpose is for you to explore, experience and evolve through the puzzles and then stop. Stop, not because you give up, but because you're happy with where you are and how far you've come. The game is not meant to be finished and the end is not meant to be understood. Does it all have a purpose, or is the game just a reflection of the mind of Jonathan Blow?

Review The Witness on R3PL4Y