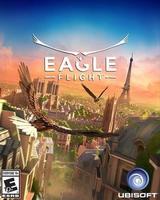 You can almost sense how this game came to be. A board room at Ubisoft where the chairman requests a VR game, because VR is supposedly the next big thing. "Does anyone has an idea", he asks the board members.

I've always wanted to soar like an eagle, one of them responds.

This game highlights the biggest problem VR has at the moment. Games are created for VR. It makes it a gimmick. Instead you want games to be games, and VR is just a tool. That would make a great game, instead we get these experiences that feels more like a tech demo than a game.

Don't get me wrong. Eagle Flight is a really cool experience. When you take flight over Paris for the first time it is an awesome feeling and it stays with you for a long while. Flying fast through narrow alleyways is really thrilling. In this sense Ubisoft has really managed to pull it off. It is one of the best VR experiences I've had, but as a game it is terrible.

It is really obvious that the main idea was to soar like an eagle over Paris. The game part is an afterthought. They've added a story that is a complete waste of space and they have 5 different game modes where you fly though hoops, fly though underground tunnels, chase other birds, catch fish and so on. These game modes are so uninspiring that a 6 year old could have come up with them. They are also very repetitive. I couldn't tell one underground tunnel from another.

In order to make it a bit more interesting, each round you play is timed and your high score is recorded to be compared with other players. The problem is that I rarely understand who I am compared to. It feels arbitrary if I turn up on top or bottom of the list. Am I compared to all players that have played that level or am I compared to players playing right now? I have no idea, which makes it kind of pointless.

This is also why I haven't dived into the multiplayer aspect of this game. The competitive part of it is not interesting enough.

Once you get to the last missions of the game, the game play turns really bad. You will meet falcons that can shoot you with screeches, and you will die instantly. In order to counter this you get a shield on a timer, but it will only protect you for a short while and will be on cool down.

The problem is that you will be shot at from an angle where you will not see it coming so you cannot avoid it. You cannot have your shield up all the time as it is on cool down, which leads to missions being hit or miss due to luck. I hate game modes where luck is the decisive factor. The last mission was so hard I yelled in my headset out of frustration, not because I played bad but because I failed due to reasons I had no control over. Once I completed it, it didn't feel like an accomplishment. I was just lucky that round.

You should try to experience this game once, but do not buy it unless it is for sale under $10, as you will not spend much time with it once the first feeling of excitement is starting to wear off.