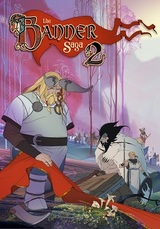 You know the familiar feeling when you're about to start a sequel. It can be a movie or a game, as soon as that introduction music kicks in you're thrown back to the feeling as it were when you first experienced this world that you love.

In The Banner Saga 2, the first few notes of the soundtrack almost gives me whiplash. The music, the art design and the characters of this game is everything.

Then you start playing and you quickly realize not only what you did love about the predecessor but also the parts that you didn't like as much. The Banner Saga 2 is a sequel that is not trying to iterate on the concept, but rather continue the story and continue the game play as it was before. There are very few news in how this game plays.

The characters that you love comes back and the world is as beautiful as ever. This game has a lot more things going on than the first one did. The first game could lean on being a new experience and rerun the same game play several times before it got old, but this game has to innovate a bit and I think it succeeds. I was a bit bored of the scenarios in the end of the previous game but in this game you get enough variety that it keeps feeling fresh.

They've also managed to balance this game much better. In the end of the first game I found it impossible to finish it on Normal difficulty with my fighters, as for this game feels hard enough all the way through. My team never gets overpowered and I do wipe a few times when I manage to screw up, but it never turns into a difficulty wall where I feel I need to lower the difficulty setting.

This is the second part of a trilogy and it really feels like it. You remember Mass Effect 2 that really doesn't have much story, but is more of a setup for the last game. Or how about Lord of the Rings second book "Two Towers" where the characters walk and walk and walk just to get into position for the final book?

The Banner Saga 2 is very much like that. You have two parties that are traveling to different locations, but you're not really invested in why they need to get there. It is just something the game needs to do in order for us to get the last game, The Banner Saga 3. They need to set the stage for the world ending so that we will be able to save it in the last installment (I hope).

In summary, I think this is a good game. I had fun playing it but I think it is a bit too long. I really don't understand the mechanics of number of fighters and varl in my party and how it affects the game play. The supplies mechanic is also very stressful and I don't think it brings much fun into the game at all.

You play this game for the art, the soundtrack, the characters and the story and this is where it excels.

Review The Banner Saga 2 on R3PL4Y