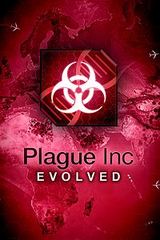 In Plague Inc. you shall cause a pandemic. You can do this as a bacteria, virus, fungus, nano robots, bio-weapon and so on. You control a couple of parameters, how the disease is transmitting, its symptoms and special attributes like resistance to cold, drugs and such, and the game is wone once you've eradicated humanity.

You fail if the world develops a cure and destroy your decease before you manage to kill every human. You also fail if you kill all carriers before infecting the whole world as you can no longer infect any new people, leading to a few survivors that live to repopulate the earth.

Simplified it is a numbers game where you shall optimize transmission, without being discovered by scientists. Once research for a cure is started you spend points to slow the cure and start killing the humans before the cure is fully developed. Each game takes about 20 minutes, and replayability is high.

I got to the last two DLC scenarios before I got tired of the concept of doing the same thing over and over. The game is fun and it has depth but after a couple of hours you start seeing the patterns that will grant you victory and you also see early when a scenario is won or lost. The game gets repetitive.

As a concept it is surprisingly fun and it stays fun for a while, but there is only so much you can do. The world events and messages gets repetitive and you stop being in the game and start only looking at the numbers. There is more depth to this game than you first might think and its one of those experiences where you just want to try "one more time".

I played it on PS4 and as with all PC ports, the text on the screen is too small and I have to play this game leaning forward in order to see what it says. Apart from that it is a neat little thing.