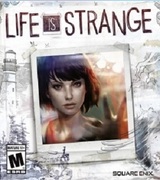 As Max walks in to the bathroom to spash some water on her face, she notices a blue butterfly flying in from the open window. She follows it into one of the stalls to snap a picture with her instacamera as the schools bully Nathan bursts into the room, really upset. After him bursts Chloe, a dropout and former friend of Max and after a bit of a rumble Nathan pulls out a gun and shoots Chloe in the chest.

This is when Max finds out she can wind back time.

That is how it starts, the story about Max and Chloe, and their life in Arcadia Bay, a small town in the middle of nowhere in US.

This is an engaging story. Max is a really likeable character modelled after Juno it seems. The game really captures the estetic of a typical indie high school movie and it hits home with me. The music plays a really important role and I find myself just listening to Bright Eyes while the main cast is taking a timeout.

I really like the time travel part of this game. It could easily become a gimmic but I think they manage to work it into the story in a really nice way. It wouldn't be the same game if they'd try to make a high school game without it. It also reminds me much of the movie Donnie Darko and the time/space continuum theme.

The game have some problems. It is really hitting all the high school tropes of the genre and quite sick of some of them. Max is reasonable on the edge of unbelievable and all the drama between these kids are a sliver too much. They could've dailed it down a notch. I have some problems with the autosave not saving the game forcing me to replay parts of it. Since the game won't let you fast forward conversations that it doesn't think you already heard, this can be quite a drag.

It is a five chapter story, and I thought the first chapter was quite allright, but after a few chapters you get really invested in these characters and the game ends really strongly. My pulse really races through the last scenes of this game and I'm not sure that I want it to end. That makes it the best story-based game I've played this year, maybe of all time.

Review Life is Strange on R3PL4Y