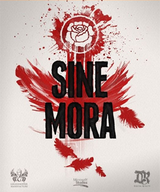 I never knew that I liked bullet hell shoot'em ups. Maybe because every time I've tried to play R-type, I have survived for about 10 seconds and then died.

However Sine Mora is very special. The whole game is developed in 3D, even if it is a 2D side-scrolling shoot'em up, and it uses the 3D to transition the player from one battle to another. While the main gameplay happens in 2D, the airplane will take a route round the screen and you will start fighting in a different direction. While it could be considered a gimmick, I find it very satisfying each time the game does this.

There will be bullets all around the screen, but Sine Mora gives you tools to deal with this. First of all, you don't die on first impact. Instead you loose time, and unless you can finish the level within available time, you will die. You could say that time is health in this case, quite literally.

When the screen is full with bullets you have the ability to slow down time so that everything moves much more slowly. That way you will easier navigate through the bullet hell, making it much more manageable.

My only complaint is that the story was not presented in a easy consumable format so I pretty much skipped it, even though I realize there might be something of value there. Reading long paragraphs of texts on the PlayStation Vita really strains my eyes.

If you enjoy shooting things, you should really take a look at this game.