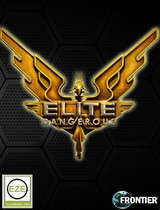 Once again I'm back in my spaceship, driving around the galaxy in search for fame, astral bodies and credits. Elite Dangerous was released for the PlayStation 4 and of course I needed to have it.

I was a backer for the Kickstarter project for Elite Dangerous and I've played the PC version a great deal, even though PC is not my preferred platform. So when it was announced that the game was coming to PS4 I was really excited. I bought the deluxe edition bundled with the Horizons dlc.

The game is pretty much the same experience as the PC edition. I was a bit disappointed that I had to start over and couldn't use my commander with fully kitted ASP Explorer that I played on the PC, but it took me remarkable short time to get enough money to buy a decent ship. They have really made it easier to make credits in this game.

Using a dualshock instead of mouse and keyboard was very awkward for me at first and I really struggled just to land on a space station, but after a bit of practice I would say that I'm now at least as nimble with the dualshock as I was with mouse and keyboard. It feels natural to be playing with a hand control and I really enjoy the comfort of my couch.

I was hoping that Frontier would take advantage of the PSVR headset and make it compatible with Elite Dangerous as they have done with Occulus in the past. However I have not heard any news on that front.

Now I have gotten my trading rank up to Merchant, my explorer rank up to Trailblazer and my combat rank up to Competent and I'm feeling pretty done with the game for now. I will keep following the new developments coming out from Frontier and hopefully it will get me excited enough to come back to this excellent game a few times more.