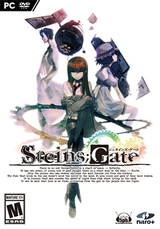 This is something new. Not actually a game in the traditional sense but a visual novel "played" on your console. I "played" it on my PSVita, and it is mostly by advancing the dialogue and watching the illustrations. There is a small bit of interaction with the main character's phone, but apart from that this is not an interactive experience.

I really like this story. It is the story of Okabe that discovers time travel and what he does with it. The story touches on the moral implications of time travel and how to deal with events happening in different realities. It is really interesting and I'm totally fascinated by this stuff. The ending I got was also very satisfying and I'm really happy I choose to stick to the end.

This was not obvious, because the first three chapters where a drag. At first, the main character Okabe is very unlikable. He is a complete duchebag and the amount of irritation I built up for him almost made me quit the game. However it was obvious that he was written this way, so I stuck around and his character improves during the experience and I really come to sympathize with him in the end.

Another thing that is a total turn-off is the sexist bullshit that this experience has in common with most Japanese manga I've read before. It is not just the character of Okabe, but all women have their breast sizes commented, the camera of the illustrations is totally male gazy and there is a scene with two lead female characters taking a shower together when Okabe walks in on them.

I'm not sure about Japan, but where I'm from female friends usually don't shower together. That is more of a male sexual fantasy. This is not baked into the story in any way. It feels like it is just there to sexualize the lead female characters.

Just like most manga I've read, this visual novel try to address homosexuality and transexuality. There is a character that is a guy but dress in womens clothes. The main character is attracted to him, but is completely immature about how to handle the gay situation. This wouldn't be a problem if it was just Okabes character, but the whole writing is very immaturely handled where it comes to this subject, and Lukako, as the transsexual character, only seems to be in this game because of his sexuality. There is no other depth to this character, and that just doesn't interest me. It is an immature giggle fest over deviating sexuality that I just don't participate in.

This visual novel was quite long. It took me 30 hours to finish and I got to the ending in the 10th chapter. This is way too long. The story builds up quite nicely and it ties together all the threads at the end, but maybe some of those threads could be skipped to make it a tighter experience. I think that would have made it even better.

I was not prepared for the Visual Novel format. I was expecting a game, but I kind of like it. I've been reading it on the bus on my way to work and I've really been looking forward to it. It doesn't require as much attention as playing a real game and after getting past that third chapter I have really enjoyed each bus ride.

I would say this is a great story and a great game if it weren't for the usual bullshit that comes with Japanese manga and the length of the story. Those two things brings down a great game, to a good game. But it is still really recommended.