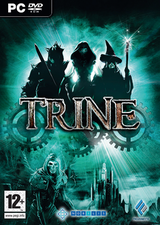 I started playing Trine in 2010. I know this because I had moved to Uppsala but my son hadn't yet been born. Me and my wife played Trine together and got almost to the end when the PS3 broke down and we lost the save file.

Now my son is 6 years old and I bought Trine again for PS4 to play it with him. This time around we actually got to the end without any hardware breaking.

My son preferred playing as thief so I swapped between wizard and knight, and that is how we played through the game.

The game is fun, not very exciting but fun. It is not too hard, but sometimes the mechanics doesn't work in you favor when you play hot seat. The camera becomes unruly and one of you disappears off screen.

The game gets progressively harder, but not unfair. The puzzles doesn't get harder, they just require more precision. You will not meet harder enemies just more skeletons which is kind of a bummer.

The estetics of over the top FX is consistent throughout the game and you don't see much variety in the levels. The music also stays the same. I can only assume this was a small production and they could afford more, but I would prefer a shorter but more well polished game.

The story is the most generic fantasy bullshit you come across and it is really forgettable. When we got to the end "boss battle" neither me or my son had any idea who it was or even that it was the end of the game.

In summary, fun game to play with your kid. If you play it by yourself don't have any high hopes. It is an ok puzzle/platformer but not much more than that.