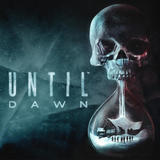 I'm easily scared. I'm a real chicken. Even games like Limbo and Inside makes me really uneasy. I sneak around in Dark Souls because I'm scared. So why doesn't Until Dawn scare me when it tries so hard?

The presentation of this game is awesome. First of all it is very good looking and the introduction scene really got me going - "oh yeah! Let's do this!". Then you get this great performance by Peter Stormare as the crazy psychiatrist and I'm completely down for it, but once the game starts proper it falls flat from its spectacular build up.

The characters of this game are truly unlikeable. That is ok, because that's the way they are written, but I don't find them believable. They are obsessed with sex and they talk about their obsession in a way I've never heard teenagers do. The way all of them act is completely over the top and most of them, except Sam, goes on my nerves to the point that I enjoy watching them die.

The cool thing about this game are the many choices you can make and how it feels like they really affects the outcome. I really like that! The story also make great progression so it never really becomes dull, just up until the last major plot twist where it felt like they're only trying to prolong the end. I really wish they hadn't done that.

I'm really disappointed on the game play, which is more like a walking simulator than an action game. When it comes to action it all boils down to quick time events, always in the sequence triangle-square-ring. It is not very fun and if you're distracted and miss a QTE it may cause that character to die. I really don't like that.

This game is playing on all the scary movie tropes with spooky music, voices, ghosts, unknown killers, maniacs, isolation, blood, gore, intestines, slaughtered animals. Anything you can come up with - it is there. The game tries so hard to scare you that it is not scary. The only thing that makes me jump are the jump scares, but not so much because I was scared as being surprised.

The developers had good intentions. The game looks really good and is ok to play. It is not long enough to bore me so I would say it is good, but I wouldn't recommend it to anyone.

Review Until Dawn on R3PL4Y