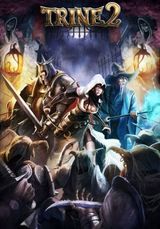 I decided long ago that I would note grade games for how bad they are, I would only grade how good they are. If a game is bad, it is of now interest how bad it is. That is why 1 on my scale is "bad" and 2 is "ok".

This game has made me so frustrated, had me swear at the TV and has made me a person that I really don't like. The only reason I kept playing it to the end was because my 6 yo begged me to, which makes all the cursing so much more inappropriate.

This game is a direct followup to the previous Trine. You continue the adventure as the Theif, the Warrior and the Wizard through unknown lands fighting goblins this time instead of skeletons.

The graphics were mediocre the previous installment, this time they are outright horrible. The devteam has taken all the gfx effects they could find and applied it to the game. It looks horrible, and it makes the game harder to play as you don't pickup on the visual cues among all the clutter. Sometimes it is really hard to even see the things you're supposed to interact with.

The gameplay has not changed one bit since the last game, and that is probably for the better. It is ok, but it never jumps out to surprise you. Having a game that is 20 hours long, you would expect there to be a bit of variety to avoid making it boring, but no. Nothing of the sorts.

The story is ... I have no idea. I just couldn't understand what the story was about. I think it was mostly an excuse to kill goblins because I was not able to make any sense out of it.

I think it is a bit sad that the game cannot provide any more innovative enemies than goblins. The goblins appear in the first chapter and you're fighting the same ones all through to the end. You're solving the same puzzles over and over in the same way. It is really hard to find any kind of motivation to go on.

So far its just a bad game. What makes is an extraordinary bad game is the design. In any situation it is impossible to tell what the game intends you to do. There are no visual cues. When you get stuck you get these verbal hints that makes no sense at all. You will die over and over, without knowing if you're doing the right thing wrong, or just doing the wrong thing. You will succeed with puzzles not because you "solved the problem" but because you brute forced it. If you jump against a was long enough you seem to get over it at the end.

So you get stuck and you want YouTube for a solution. And there a player uses a skill you don't have to solve the problem. And that gets you wondering, have I screwed up? Do I need that skill to solve this puzzle? And in the end we got through them all, but I think most was due to luck, and not so much as we solved them.

There are bosses in this game, reused over and over. The difference to normal enemies is that they'll kill you in one hit. That is not very fun gameplay. The game design seems to think that one-hits-kills is a way to ramp up the challenge. But it only makes you frustrated. The environment becomes more hostile the longer you go, it will have more situations where you fall to your death, where you need to react within a moments notice. It is not the kind of difficulty that is fun. It is the one that is irritating.

In the end, the game is done, and then it starts again. I so much hate fake endings. Now I've come to understand that the fake ending was because I'm playing the Complete edition which also includes the DLC. All of a sudden the game was not ended, instead I had to rescue Margaret from a Goblin invasion. Margaret is a female in a sack with a male voice actor. That is the amount of which this game sucks.

Playing it hotseat all the way through me and my son really pushed the edge of Trine 2. Some puzzles are not solvable in hotseat, so one of us had to solve the puzzle while the other jumped out of the game, to jump back in when the other player was clear of the puzzle.

Another really irritating thing is how the camera is relative to both players, so at times you cannot see a thing, because the other player is in the wrong part of the screen. Which leads to me and my son yelling "get over here!" to each other. Not to mention what happens when two people tries to do advanced platforming and the camera tries to follow both. It is just impossible.

Towards the end of the DLC there were actually two levels that I didn't hate. The one where you go into the belly of a giant worm. We have seen it before, but this was really gross and I actually enjoyed it. We only got stuck on one puzzle so the whole experience was ok.

The next level where you go to a cloud kingdom reminded me a lot of the Shadow of the Beast remake. This was not nearly as good, but it gave me good vibes at least.

I'm never ever ever going to touch this game again. But as I've promised my son, today we installed Trine 3 and started up a whole new chapter of pain.