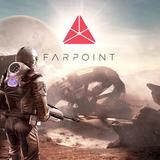 So I fell for it. I bought the plastic gun. You know what? it's pretty great. Unfortunately the game is not so great. Let me explain.

Going into VR is about getting an experience, and the experience is all about immersion. Being able to look around and have the world around you gives great immersion, however the controller in your hand represents a disconnection to the immersion you feel in the game.

When you instead put a plastic gun in your hand, the immersion is so good that you forget that it's not your hand holding that gun, so when you wiggle your fingers you wonder why your hand has stopped functioning.

That is how good the immersion of this game is. You're really there and you're really shooting aliens. That is awesome! The experience is really cool, and it works very well, most of the time.

However the game is really bad. Most of the mechanics are ok, but shooting the same aliens over and over, gets boring pretty soon. The shooting is also way too hard and requires too much precision. The enemies moves around alot and I can't keep up. So I died a lot in this game and you cannot turn down the difficulty. Dying is a thing that takes you out of the immersion, as staring into a load screen for 2 minutes kind of disconnects you from the world.

When you get dropped into the game the first time it is pretty great because you discover this new way of playing first person shooters that you didn't thought was possible. Then it starts to get tedious fighting the same enemies over and over. But, the game revitalizes when it goes full blown Halo on you. That is pretty amazing, but again the game makes this huge mistake of throwing wave after wave with the same enemies, so the whole game turns into a basic shooting gallery. This is a shame because it had potential.

The story is not very great. There are only 4 different guns. There are two kinds of environments, barren rocks and metal space corridors. The music score is pretty good, but that's about it.

Sorry game, I cannot like you. But you're ok because you gave me an experience that I don't think I would've found without you.