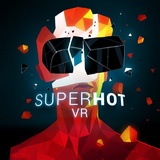 This game has me thinking about a whole lot of things that aren’t obvious when playing fps in nonVR.

The game is pretty much the same as nonVR Superhot. You shoot red guys but you do it in VR. To fix the problem with moving around in VR you are completely stationary. You stand on one spot as red guys turn up around you. However you can avoid bullets by leaning out of the way, and it makes you feel like Neo in the matrix when you physically dodge a bullet by leaning backwards.

This game requires you to move alot, to the point that you want to play it standing up without any obstacles close to you. You want to reach out in the air to grab a gun from an enemy or lean down to pick it up from the floor. Beware that you don’t hit anyone in the real world while playing.

The story is not as prominent as the first game but the puzzle solving fps action is great. You can pickup and throw things, you can wisp away bullets that are suspended in the air in front of you. It’s really great, the immersion works really well and it feels good to shoot these guns.

As for criticism, it feels like an add-on to the first game even if it has its own levels. Being shot from an angle you weren’t watching is slightly irritating and some scenes feels luck based, like when you’re supposed to dodge three shotguns at once by throwing yourself to the ground.

I didn’t like the idea of playing standing up at first, as I enjoy the comfort of my sofa, but I think the game becomes better because of it. Moving around makes you feel part of the world in a way sitting down wouldn’t been able to achieve.

Still this is one of the best VR experiences I’ve had so far and I think other games could learn alot by looking at this one. It’s truly a masterpiece.