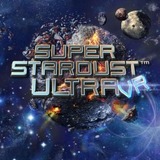 I have a vague recollection of an Amiga game called "Super Stardust". It was an Asteroids clone with a planet in the background.

I never played the Super Startdust that came out for PS3, but looking at this game it seems like a remake of that old Amiga game. A basic Asteroids clone, but with insane intensity.

So you could say that this is a VR remake of a game, that was a HD remake of an Amiga game. Whatever - this game is fun, really fun. It is a fast paced 100% action, and that should not be a surprise as it is delivered by Housemarque.

There are five levels and I played through them all on easy. This took a while as the game's definition of easy is not really what other game's would label as such. I've started the Normal difficulty and while it is still fun and challenging, I do not find the replayability as good as with Resogun, which has a similiar concept.

The conversion to VR was done by D3T Ltd. and it works fine. I do think the game gets better in VR because you get closer to the action and the adrenaline really flows. However I get tired in my eyes after a while and I can't play for as long as I would in non-VR.

D3T has also tried to add a full 3D experience where you sit inside the space ship and you drive around an arena to shoot enemies. This game mode actually sucks. It seems very sloppy and doesn't match the original game at all. I tried this mode but quickly abandoned it for the original game modes which are much better polished.

In conclusion, this is really fun. A great game to demo VR for friends, but it will not stay on my PS4. I will uninstall and move on to better experiences.