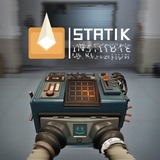 This game is very simple to grasp. You wake up in a room, strapped to a chair, and there is a doctor performing experiments on you. Your hands are stuck in a box, and this box has a lot of buttons, lamps and gizmos that you can control with your hands from inside the box. The doctor take notes and comments on your progress.

Each box is a three part puzzle. After you solve one part, the box changes and opens up to reveal the next part of the puzzle.This way it goes on until the doctor is satisfied.

The idea on how to make the gamer immerse in the predicament of having your hands stuck in a box is brilliant. The game does this by making the controller the box, and each button on the controller is something you can do inside the box in order to jiggle the puzzles on the surface. This works so well that it takes only moments until you really feel that your hands are stuck and you need to get out.

This game is very well designed. It manages to tell you the rules of the game without telling you anything at all. You quickly learn that each button on the controller does something to the box. You quickly understand that there are clues in the room you're sitting in. You quickly learn to focus on one thing at a time, and really study the puzzle, because all of them are based on logic.

The puzzles are very good. None of them are obvious, they all make sense. You get clues on how it works by trying things out and I never got stuck for very long. I had to look up things on YouTube twice, but that was only to get a hint if I was on the right track or not, and then quickly get back into the game in order to solve it myself. I didn't want to ruin the experience of solving the puzzle even if I needed a pointer. Maybe the Doctor in the room could've provided that service instead of YouTube?

A very commendable thing is that no puzzle is ever repeated. They are all unique, which is quite uncommon in a puzzle game. Usually puzzles are based on each other, but here you get unique puzzle boxes with new challenges. Maybe that is why there aren't so many of them. They ran out of ideas, and instead of repeating puzzles they decided to end the game. I think this is ok, even if I was expecting at least 4 more boxes.

As a PSVR game this is one of the best I've played as of yet and I really recommend it if you want something apart from rhythm games, FPS and horror.