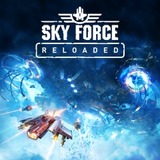 I’ve spent more time with this game over the holidays than I might have spent with another shoot-em-up. It is a brilliant game, very addictive and it makes you wanna go just one more round.

Sky Force Reloaded is a sequel to Sky Force Anniversary, not so much in a story sense, but as a straight up shmup. You’ve got new levels, new enemies and new bosses.

I felt that the original Sky Force Anniversary was perfect, so I was afraid that they would change the game play slightly but enough to ruin it. Instead they kept all the parts that makes Sky Force so great and just deepened all the systems around it.

In the basics, Sky Force Reloaded is like any other shoot-em-up, where you travel on a automoving background and try to shoot everything that comes up. In the end there is usually a challenge in form of a boss battle.

In order to continue to the next level you must finish the previous one, but you also need to unlock a certain amount of medals. Now, I hate this kind of system in other games, but in this one I really like it because each medal represents a challenge and it is a way of pacing the progress. Unless you have 20 medals you’re not ready to continue to the next level. It will be too hard for you, as in lesser games it’s just a tool to make the game longer.

There are four medals for each level. Kill 70% of the enemies, kill 100% of the enemies, rescue all the humans and stay untouched. This makes you play the same level over and over, because you’re rarely able to do more than one medal each run.

Once you’ve completed the four medals, “hard” difficulty opens up for that stage, and the enemies gets stronger, shoots faster and it is a new experience. Four new medals are then available for collection on hard and then “insane” difficulty will open up with four new medals and completely insane enemies.

This hadn’t worked at all unless the stages were really well made. You don’t want to play them once. You want to play them over and over to learn all enemy placements in order to precede them by shooting at the spot where they’ll turn up. And once you really know a level you can play it on insane without taking a hit. (Link to my youtube)

This game is hard. It is really hard. It is harder than Anniversary, but there are mechanics that makes it ok. One reason you don’t throw your controller into the wall is that every attempt means progress. In every attempt you make you will collect stars that you’re allowed to keep even if you fail the stage. You use the stars to upgrade your ship, making the next attempt slightly easier. So even if you fail at what you were trying to do, you will always make progress, and this makes up for the game being very hard.

The game is always fair because there is no RNG. The enemies will turn up at the same place at the same time every play through, and this makes it all your fault if you cannot precede the bullet hell by shooting enemies before they spew out mor than you can handle. You should’ve learned the previous time where that tough enemy appears so you can be on top of it from the start.

I played most of this game in coop with my son, except the “stay untouched” challenges, because he is a tad too reckless to manage those. It is an excellent coop game, and it does get a whole lot easier when you’re two. I’m not sure I would be able to 100% some of the stages without his help, so it might actually be required to bring in a friend for the harder challenges.

As you probably know by now I really love this game. I don’t have any major complaints. The first bonus level B1 does not feel like a true Sky Force level, but then it is outside of the main campaign. I can’t see how you would finish the Spider Boss without using power-ups, but then why should you, power-ups are part of the game.

This is almost perfect. Go out and buy it now. I played it on the PlayStation 4.