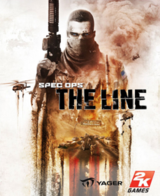 Spec Ops: The Line
mikaellundin 5 May, 07:36 Completed the game

This review will contain spoilers. If you haven’t played this 6 year old game and you plan to, just get on with it and get back to this review later.

I’ve heard a lot about this game and how special it is. It is constantly referenced when talking about genre breaking, stepping outside the boundaries of the genre box. So I picked it up a few years ago, played the first two chapters and thought “this is shit” and put it back down. I haven’t thought about it since.

So my gamer friend told me he’d been playing it and thought it was good, so I reconnected my PS3, downloaded the game to give it another go. This time I pushed my way through and I have an opinion about this game.

The game play is crap. Well, that is unfair as it is a 6 year old game and a lot happens in six years. What I mean to say is that the game looks good for its age and it controls reasonably well. It’s just that shooting my way through a 5 hour experience, constantly going from cover to cover is exhausting. I get so tired of the shooting that I turn off the sound. I can’t listen to it anymore. If the game was made today the game play would have been more varied, but the shooting is also part of the narrative and we’ll get to that.

Because shooting is such a big part of the experience it should be really good. I don’t think it is. It is not very fun. I use the same weapon throughout the game and that weapon is not very satisfying to shoot with. I shoot the same enemies through the game and they never do anything unexpected. I’m getting shot at which makes the screen go monochrome but it doesn’t seem to affect Walker anymore than dizziness. I constantly press the wrong button for taking cover/jumping over cover so I put myself in direct line of fire. And you can’t jump back, you just die. Also I can take out snipers with a hand gun if I aim properly which shouldn’t be possible.

What I do like about the shooting is when I shoot someone in the foot, they don’t die instantly. They’re out of business but still alive which I think is a nice detail.

About the narrative, this is why I play the game. The game play doesn’t interest me at all. I want to know is what story elements people are talking about.

Three infantry soldiers walking into a deserted Dubai looking for survivors are in for a surprise when they find that the 33rd has taken the city for its own and established their own little kingdom. What can go wrong? My guess is that we’re in for a killing spree and the game would like to tell me something about that.

So we start with killing some arab bandits and the first line is crossed when we go killing american soldiers instead. I think the game want me to feel uneasy about that, but it really doesn’t matter to me. Probably because I’m not American and I’m not indoctrinated with that sense of patriotism that should make me feel uneasy. The game makes a big deal out of it.

What strikes me is how many people there are in the 33rd. I’m killing hundreds, which is in itself completely unbelievable, but also that this amount of soldiers would camp out in the desert and claim it for their own seems pretty bogus to me.

We continue the journey and the antagonist start playing tricks with your main character Walker. This is when you start to realize that the person you’re playing does not seem very stable. Also your team mates are starting to crack. “So this is where they’re taking this” I say to myself and sense a whole Mass Effect 3 thing going on (it’s all in your head).

Another line is crossed when you start killing civilians, an you realize what the game title refers to. As you start the game there is a rule of war and as you start crossing the lines one by one it all descends into chaos and madness. This premise is pretty great and I love the idea, but as you reach the ending it has been so clearly pointed out to you that there is no surprise element at all. Sure the ending is satisfying but it doesn’t have that edge that should make you stop for a minute and reflect on all the atrocities you’ve committed. Instead the game literally have to spell it out for you “look what a bad human being you are boo-hoo”.

So this game had an idea, and it was good but the execution was done poorly. It was groundbreaking when it came out but today this is the bare minimum for story telling. You need to have more than one idea, you need to tell more than one story and the game around that story actually needs to be fun.