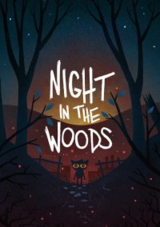 Night in the Woods
mikaellundin 20 June, 18:33 Completed the game

Night in the Woods is a walk and talk kind of game. You play as Mae, a college drop-out returning to her hometown finding it quite different because she and the people she has grown up with has become young adults. She also finds it pretty much the same as it’s a country town and as we all know change happens slowly, if it comes at all.

It is a walk and talk. There aren’t much in ways of controls. You walk left or right, talk with people and occasionally you jump. Sometimes you choose dialogue options but most of the time you spend reading. I think it is just those dialogue options that separate this game from being a walking simulator.

The story is not very good. I like the premise, the characters and the world, but there is no story arc. In order to have anything happening to these characters they created some sort of mystery to solve, but it doesn’t feel like it belongs. This game would benefit from focusing on the social relationships between the characters instead of a phoney murder mystery.

What I do like about the story is how it deals with mental disorders. Everyone in this game is somehow suffering, even though it is not apparent from the start. Some of the people try to deal with it by working long hours. Selmers writes poetry. I like Selmers. He's a cool cat.

The dialogue between characters is excellent. The way things are articulated and the pauses in the dialogue really communicate feelings that the characters have in a way I haven’t seen in a video game before. Sometimes a pause says more than words.

I like the art style a lot. The game looks fantastic, but the sound design is ... too quiet. I would have appreciated more ambient noises and music. Instead this game is so quiet I sometimes wonder if I accidentally managed to mute my TV.

The game is a bit too long. At times it feels like it’s not going anywhere. There are a lot of scenes that doesn’t bring the story forward. It is a shame because the game has great potential if they would just know what to do with the characters, the world, the dialogue and the art design. Give it a good story, and I think it could've been a jackpot.

Review Night in the Woods on R3PL4Y