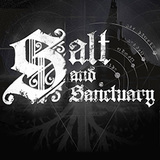 I just saw the credits roll on Salt & Sanctuary and I feel just blank. I didn't understand anything of what was happening. I need to read up on the story.

The game is made by a duo, two people doing the whole thing from programming, art design to music. In that sense this game is a really impressive feat. It is a large world with interconnected levels and lots of different bosses and complex systems. I am impressed.

If we are to analyze the game for what it is, this is a metroidvania Souls clone in 2D. Sometimes it comes so close to Dark Souls that it is just transitioning the concepts from 3D to 2D. I don't think that works very well. Actually I enjoy the mechanics that Salt & Sanctuary bring to the table itself much more - like the brands that will let you wall jump, jump in the air or walk upside down. Those things are brilliant. Fighting huge bosses that takes up the whole screen, not so much.

I really like the art design of this game. I've heard that it is mostly hand drawn and that is pretty cool. I heard criticism that it is bland and all looks the same, but I really like it. Sometimes the game is too dark making it hard to play on the PSVita out in the sun, but this is a dark game, so I should just stay indoors.

My main trouble with this game is the platforming. It is ludicrous. Maybe it is a PSVita thing, but I can never figure out what ledges I'm meant to jump over and which ones I'm supposed to jump down. The viewport of this game is so small, I can never see if there is a platform below. Most of my deaths has come from falling, because I thought there was a platform below when there wasn't. I would want the game to be better at providing visual cues where you should go in a level. Dark Souls is pretty good at this. If they want you to go up a ladder, they place a torch just by that ladder. In Bloodborne there are candles on the floor that light up when you go past them. These things are so subtle that you hardly notice them, but they will indirectly point the way forward.

I really like the design of the bosses. Many of them are pretty cool, but the boss fights are pretty unbalanced. Some bosses I ran into with 1 health potion and beat it, and others I did over 30 tries. Shields are very overpowered in this game, and if you're ever in doubt, just equip a shield. I upgraded the Type 46 Tower Shield, and with that I could just stand and block all day. No boss, except those with grab attacks, could ever break through.

This game is too long. Some areas aren't very good, or doesn't bring very much to the table. I think that this game would benefit from cutting away 1/3 to 1/2 of the game and become a much better experience. I played some of the optional bosses, but not all because there was too much and I was pretty tired of the game by the end.

All in all, I liked the game, and I don't regret spending my time with it. I think I need a break from soulslikes and metroidvanias now, but this is a genre that has started to grow on me.