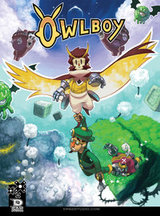 Ok, I don’t really hate this game. I might have overreacted. It is very pretty. Stunning even. It might be the most beautiful pixel art game I’ve ever played. No, it definitely is. Every scene is like an artwork. I’m not kidding, this game might be my most screenshotted game to date, and I want to print them out and tapestrate my walls with Owlboy.

But then, the story is also great. It has a great beginning, arc and a very satisfying ending. I couldn’t have wanted more from a story. It is very well written. I just wish they made this a point and click adventure instead of an action platformer.

Why did I say I hate this game? Because it’s bad! It is so frustratingly bad at times you just want to pull your hair. I think something must have gone wrong porting it to Nintendo Switch. The person that decided you should pick up things with LZ and shoot with RZ should not get any Christmas presents this year.

RZ is not a button you want for shooting. It is behind the controller and it is very uncomfortable to reach let alone push repeatedly. So playing boss battles where you need to shoot for minutes at a time, I would get cramps in my hand. The control scheme is so bad. The LZ/RZ situation is so confusing in my mind that I never really got it figured out. Whenever there was a panic I would just press all the buttons. I could never really get Otus to fly or jump reliably. I was intending one and Otus would do the other.

I think the control scheme can be blamed for a lot of this game’s shortcomings. Those situations that required technical skills with the controller wouldn’t work because the controller scheme was so bad. But I also think this game is generally poorly designed.

The levels aren’t very good. This is a metroidvania in the sense you can go anywhere but the problem is that anywhere looks like everywhere. I cannot distinguish where I am by looking at the environment. A level looks the same all the way through making it really hard to orient yourself. Once the game starts doing the blackened out levels you think it is the gimmick for that level but it keeps coming back for the rest of the game, and it is so frustrating to play a game where you can’t see. The developer uses light in some puzzles but they aren’t very good, the puzzles.

The puzzles are mostly about picking something up from a few rooms back and dragging it with you through environmental hazards. It doesn’t feel like you accomplished anything after completing a puzzle. They are just in your way of making progress. The game is also stupidly bad at describing how mechanics works, so when you’re presented with something new for the first time, there is no indication that you should take note, that it could be useful or how it could be useful. A better design would demonstrate the properties of this new thing the first time you see it so you would have the ability to draw a conclusion “I should probably use this new thing in this puzzle”.

The bosses in this game are very unimaginative. You beat them all the same way, shoot them. The problem is that shooting in this game is not a good mechanic. You have a peashooter with bad range and you have a blunderbuss with no range. Sometimes one is better than the other, but every boss is defeated by shooting them enough times.

A couple of the bosses have insta-kills where they will lunge at you and kill you immediately. However this game is not a good action game. The mechanics aren’t there, you don’t have the tools for it and the control scheme makes it hurtful.

In conclusion, this game plays very badly, but I think if you have the patience you will be rewarded. You will be rewarded by stunning visuals, a heart tearing story and a very cool world with awesome characters in it. It will be an investment but I promise that it will pay off in the end.