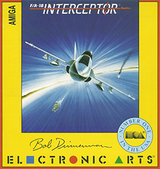 I remember fondly this flight simulator to have the best feeling of the flight simulators out there. It felt as if the plane actually had weight and you we'ren't just a point in mid air abiding to gravity rules.

The problem with this game was that there were not much happening. Only a few missions, that you would finish in no time - only a couple of items on the map - like the golden gate bridge.

If they had taken this concept a little further, added more buildings and terrain, created a story and let you fly more and deadlier missions, this could have been the best 3D game to Amiga. Instead the feeling goes ... Wooow ... meh.