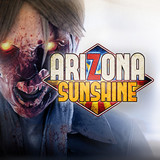 This is the worst VR game I’ve played so far.

First time I played it I thought it was too hard to aim with the playstation move controllers. Precision wasn’t good enough so I restarted with my Aim controller instead. This broke the game, I couldn’t get past the radio in the introduction because I couldn’t interact with it. I could interact with other things but not the radio, and the story doesn’t let you progress without listening to the radio.

So I restarted the game again with the move controllers and struggled my way through it. Aiming is much worse than other games in PSVR. This makes the game much too hard even on easy difficulty because I keep fighting the controls. I had huge problems with opening doors, pulling levers and such. I would spend 15 minutes trying to open a vault because the controls would not let me do what the game wanted me to do.

I really dislike the way you move in the game. You teleport, around but if there is any obstacle, like a twig, you can’t and you have to teleport a way around it.

I also move into objects repeatedly. The effect is that the screen goes completely black and you try to rotate, lean, move in order to regain orientation and move out of the way of the object. It is increasingly frustrating when you have a zombie gnawing your ass at the same time.

The level design i catastrophic. Just because you can look behind you doesn’t mean it’s good design to put enemies there. Because the movement and controls are so bad it becomes a real hassle when zombies appear from everywhere and there is no place where I can funnel them through. Compare this with Farpoint where enemies comes from one direction at all times, a much better designed VR shooter.

In the end I gave up in the caves where zombies where appearing from everywhere and the controls were so bad I couldn’t handle it. It just didn’t feel fair. Maybe its a bad port from PC, but I feel that it should be removed from PSN store until they’ve fixed all the issues.