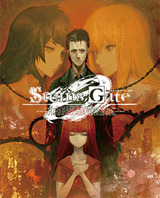 Oh my. Where to begin? Let’s take it from the beginning. No wait. That is not where it begins. It begins in the future. Or maybe 70 million years ago.

The first Steins;Gate was excellent. It is one of those experiences that stayed with me. Once and a while I come to think about Steins;Gate and smile to myself. That is also why I was afraid that Steins;Gate 0 would just be a spin-off to capitalize more on the franchise. And maybe it is, but it is also very good.

This game starts where Steins;Gate left off. The main character is Rintaro Okabe, severely traumatised by the events in the previous game. He has given up on his mission to reach Steins Gate and he always keep medicine at hand for his panic attacks. Okabe is a mess and Kyouma Hououin is no more.

But the world lines converges and there is no way for Okabe to escape fate. Fate will come seek him up, and he soon finds himself at the center of world’s ending yet again.

I really like the way the developer takes the story we already know and give it more dimensions. This is not about what happens before or after the events of Steins;Gate, but rather what would happen if the circumstances where different. I like the way they develop the character of Rintaro Okabe and his journey from despair to resolve.

This story is very clever. It is clever in so many ways, like how it requires you to travel through time in order to get to the true ending. That is some serious third wall breaking for you and I would never have thought of it myself. After reading an article with the story and its branching paths explained, it is really mind blowing, and also a bit overcomplicated.

This is the weak parts of the novel. It tries to give you multiple endings, but they are very similar to each other. In order to reach all endings you will see the same scenes played out over and over. A lot of the scenes also feels like filling, that nothing is really happening, and then BOOM the whole world changes and it is not always easy to follow the causality that brought us there. I guess only the developer knows for sure.

If you're going to play this, you shall look up the straight path to the true ending in a wiki, and not seek out the different branches. That would be the best way to experience this.

The true ending didn't have quite the closure I was hoping for. Instead it felt like they’re setting it up for another sequel, which I’m sure I will buy, but I really wished they would have been braver at the end and gave us a proper end.