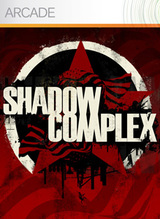 This is an oddity, that you remaster a game that is ony 6 years old. The original came out in 2009 and the remastered version 2015. I assume it was done so, because the original was exclusive to Xbox 360 and in order to release it for PlayStation 4 they needed to do it under a new name.

It has all the characteristics. The whole game takes place in the same environment, some underground base. There are very few assets, every corridor looks pretty much like the previous one. The same boxes, floortiles, doors, barrells, and boxes, and more boxes. There are also very few enemy types, and the way you can see they are tougher is that they have different colors on their uniform. (red helmet, oh no!)

The game starts when the player character is out hiking with his girlfriend and they manage to stumble upon an underground army (!) that is just about to embarge on the world. Luckily our hero is a military genius and takes on the army all by himself. From that point you kill thousands of anonymous soldiers without a flinch, and in the end you launch a couple of nukes to take care of business.

The game story is the worst. The dialogue is so cheesy that you cringe every time any of the characters open their mouths. Your lady is the typical damsel in distress, that is over sexualised with huge boobs and bottoms.

The upgrade system is somewhat interesting. The enemies are however very dumb. The bosses are just giant robots without any kind of personality, and the main villain is not revealed until 5 minutes before you kill him. Such a waste of potential.

Is there anything good to say about this game? Yes! The shooting is very mediocre but yet it is quite meditative. It doesn’t require much from you as a player. You are always pointed in the direction that you should go, and it is pretty basic going from room to room just shoot everything that moves. It is not clever. It is not sophisticated. But it makes for some fodder for killing time. Just like a B-movie with Bruce Willis.

I played this game on PlayStation Now, the streaming service for PlayStation. Since it was a PS4 game, I could download the game to my console and run it without streaming, just as a part of my subscription. It worked like any other game that you buy and download from PSN.

I spent about 4 hours in the game, from start to finish. Because it was so repetitive this was a bit too long. i would have enjoyed it more if it was shorter. I also encountered a strange bug in the end that made it hard to finish the game - but watching a youtube video I got the clue on how to unbug the game and complete it.